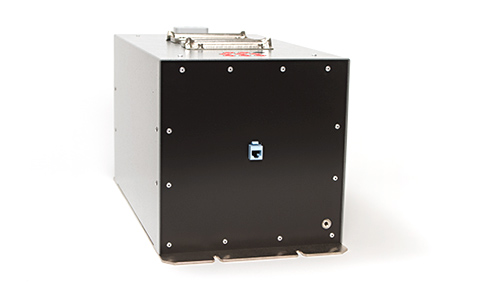 The F-130814-1004-2 Surge CDN couples the surge specified in EN 61000-4-5 onto high speed digital telecommunications lines of the Equipment Under Test (EUT) and decouples the surge from the Auxiliary Equipment (AE) port. Description The F-130814-1004-2 is designed to couple the 1.2×50μs/8×20μs surge transient defined in EN 61000-4-5 onto balanced (symmetrical) high speed digital telecommunications cables as shown in the Figure below. The Surge CDN couples the Surge onto active telecommunications lines operating at speeds up to and including 1000BaseT for both Power Over Ethernet (POE) including IEEE 802.3af compliant) and non-POE configurations while providing high isolation of the Surge to the AE port and minimal degradation of the intentional telecom signal. The Surge CDN maintains all of its Technical Specifications while delivering the full range of open circuit voltage to short circuit current demanded by the EUT load. Other Important Considerations Since the Surge CDN is inserted in the middle of an active telecom line, it is important to take into consideration the impact the Surge CDN has on the telecom signal transmission quality, as well as its performance as a Surge CDN. A potential user of a Surge CDN needs to familiarize himself with these transmission quality issues, as well as ensuring the Surge CDN will work optimally under all load conditions while providing significant isolation for the AE port. Key Features of the Fischer Model F-130814-1004-2 are discussed on the next page of this data sheet.

Product specifications are subject to change without notice