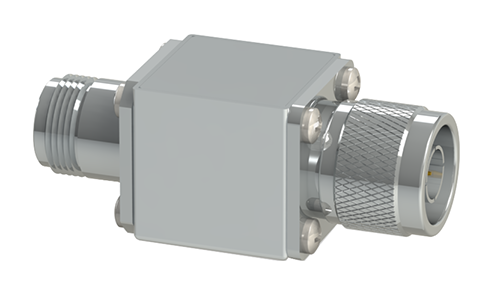 The FCC-250-5000-N has an RF bandwidth of 18% with a center frequency of 5,100 MHz. It protects sensitive receivers and transmitters up to 20 watts. The suppressor is constructed of proven connector and transmission line components. It is capable of dissipating multiple 25,000 peak ampere transients having an 8 msec rise time, and 20 msec half magnitude pulse width.

The suppression technique utilizes a quarter wavelength shorted stub transmission line in shunt with the transmission line that is in series between the antenna and RF equipment connectors. A lightning strike having an 8 msec rise time and 20 msec pulse width will have most of its frequency spectra below 30 kHz. The shorted stub will only represent 0.0000013 wavelengths long, or approximately the ac resistance value of the conductors at 30 kHz. This technique will provide approximately 70 dB attenuation for lightning strikes, which will represent a reduction in power of 10 million. It is expected that typical lightning amplitudes leaking through the suppressor will be reduced to less than 20 peak volts.

The inner cavity of the suppressor is encapsulated with a lightweight, high temperature, low loss dielectric material which provides additional mechanical stability during shock and vibration.

The materials utilized exhibit excellent linearity, and the two-tone, third order intermodulation intercept point is in excess of +80 dBm with signal levels of 1 watt.

The suppressor has been designed to withstand harsh environmental requirements. The construction methods have been tested and demonstrate compliance to the following portions of MIL-STD-810C:

Mechanically, input and output connectors are male and female, Type N. The structure of the housing is brass, which is plated with fused bright tin. The plating is in conformance with MIL-T-10727. This construction and plating ensures years of lasting performance. Since the oxides of tin are conductive, grounding will always be maintained even in a corrosive salt spray environment.

Both connectors, as well as the lid of the suppressor’s container, are soldered in place to maintain low resistivity and moisture sealing.